A randomized pilot study of acupuncture treatment for primary dysmenorrhea 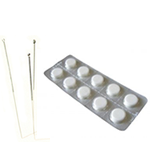 STUDY DESIGN:
Thirty-five young women with a diagnosis of primary dysmenorrhea were recruited for the study. Their dysmenorrhea severity was rated by visual analog scale (VAS) immediately prior to entry into the study. They were randomly divided into two groups; and the following month they were given NSAID (group 1, n=24) or acupuncture treatment (group 2, n=11). Pain was rated again using VAS during menstruation in both groups.

RESULTS:
After one month’s treatment, pain scores were significantly lower in both groups (p<0.05). Mean pain scores decreased by 52.2% and 69.5% in the NSAID and acupuncture groups, respectively.

CONCLUSION:
Acupuncture was as effective as NSAID therapy for patients with primary dysmenorrhea. Since this was a pilot study with a small sample size and short follow-up period, larger studies are needed to clarify the effect of acupuncture in the treatment of primary